Sylvia Klein is one of the founding members of AMI-Quebec. She spoke at our Annual General Meeting on June 5, 2012 in honour of AMI’s 35th anniversary.

Good evening, AMI members and friends. It is a pleasure and honour for me to be here this evening and share with you the story of the beginnings of this organization.

The late May Gruman, on a visit to Australia, learned of a self-help group in existence there. With this information she started looking for people with similar problems in Montreal, in order to share what she had learned.

I can tell you that there wasn’t very much information to be had at that time. Her Australian friend suggested that she get in touch with a Mr. Kahan in Saskatchewan. He had tried to start a group in Montreal a few years earlier. He gave my name to May as someone who would be interested and she called me.

It was a most amazing meeting. We connected immediately, and talked for hours. I was able to talk with her about all the problems we were having with my son and she with her daughter, problems that we could not even discuss with our parents, brothers, sisters or even close friends. It was too difficult to share with family or friends who really did not understand. Nobody understood.

And so, 35 years ago, we formed the nucleus of our first self-help group, consisting of the late May and Sam Gruman, the late Eve and Ed Leckner, the late Ruth and Ken Moscovitch, myself and my husband, Bill. In the beginning we met in each other’s homes.

At about that time, there was a series of articles in the Montreal Star written by a Jim Farquhar about mental illness. His last article was about what happens when the mentally ill person is discharged to the care of his or her family. The family becomes the main source of care without knowledge, training or professional support.

That article struck a chord. May and Ed called Jim Farquhar and an immediate appointment was arranged. He was a very young and knowledgeable journalist who listened attentively to their story and promised to write another article about “after the hospital-what”. And he did – with a phone reference to our group.

That article resulted in many phone calls and shortly afterwards we had 30 new people meeting in our newly acquired room at the Institute of Psychiatry, thanks to the generosity of Dr. Kraits, then Chief of Psychiatry at the Jewish General Hospital.

As our group expanded, we acquired more rooms. We also had the use of the auditorium at the Institute for our monthly lecture series. And so the foundation was laid for our first formal group.

In 1977 we took the same name as our Australian friends, and incorporated as ARAFMI: The Association of Relatives And Friends of the Mentally Ill and registered as a charitable organization. Our first token grant of $100 was received from the Canadian Schizophrenia Foundation of Montreal.

I would like to mention a few people who helped us greatly in the beginning:

Stan Urman, who volunteered his services as consultant.

Peter Bennett, who gave a series of educational lectures.

Jim Carter, who helped with our first press conference, and is still involved with the English health services.

We continued meeting regularly with our monthly guest speakers. We organized small working self-help groups assisted by social workers provided to us by the Douglas Hospital.

From the social workers we learned how to cope, how to manage, and how to live with our mentally ill relatives. They were an invaluable asset to the groups.

From our lecturers, we learned much more about mental illness. They helped fill in the gaps in our knowledge that we needed in order to understand and help our families. One of our speakers turned out to be Dr. James Farquhar, the former Montreal Star reporter, who wrote the series of articles.

Irene Ranti managed to arrange our first office space with a typewriter and desk and we issued our first newsletter. May did the typing and Irene did the French translation.

We distributed the newsletters to all our members, to social workers in the hospitals, to the doctors at the institute, hoping that they would refer the parents of their patients to us. However, it took many years before we received our first referral.

Ed Leckner and I arranged meetings with the heads of the psychiatric departments of all the hospitals, to explain to them that we were starting a self-help group for parents, not patients, and that we hoped they would refer parents to us. Again, it also took many, many years before we got our first referral.

A telephone committee was formed to call each family once a month to let them know about our forthcoming speakers. We also kept an attendance list and followed up on any member who missed meetings and needed extra support.

In l979, Irene Ranti and the late Jack Kastner assisted in the formation of AQPAMM, the first French group in Montreal.

Sylvia and the late Max Silver established a tribute book for memorials, birthday wishes, etc. as a fundraiser.

ARAFMI also sponsored Irene Ranti in the formation of Club Ami in an apartment on Cote des Neiges Road. It was a drop in centre for ex-patients, which also developed into a second hand shop.

In 1979 ARAFMI also formed its first lobby group. It was time that we made ourselves known to the government health agencies.

In l980 NAMI, the National Alliance for the Mentally Ill in the USA, held its first annual conference. ARAFMI joined the organization and sent its first 2 delegates to Chicago to attend the conference. This was very important as the delegates returned with a wealth of information, contacts, reports and educational material. That year, we also held our first of many fundraising events, a theatre night.

We participated in community events and seminars that were available, to make our name more known. Members manned our tables at shopping malls and summer community outings in the local parks.

In 1984 our organization changed its name to AMI-Quebec Alliance for the Mentally ill.

In l985 a provincial umbrella organization of family associations was formed with AMI-Quebec as a founding member, and active participant in its formation.

Also in l985 we had been invited to the group meetings for parents at several Montreal hospitals to talk about AMI-Quebec with the result that many families turned to AMI for further ongoing support.

In l988 a sibling and adult children group was formed by Sharol Caswell and Joanne Smith.

I recently reread some of the old newsletters and was amazed at how much was accomplished by our wonderful volunteers.

Until 1990 AMI operated with volunteers only. It was no wonder then that our thoughts turned to engaging someone to co-ordinate our efforts.

In 1990, thanks to the efforts of the late Monty Berger, we retained the services of Ella Amir, and the rest is the prologue to where we are today.

I would like to say a few words to those who were here in the early days of ARAFMI. It was a fulfilling experience working with you. You came from the 4 corners of this city, from all walks of life and different cultures. We all shared a common pain, a family member with some form of a mental illness. We blended together as an extended family without barriers. Our goal was to help each other.

Earlier I mentioned the 30 new members we acquired as a result of the article in the Montreal Star, well, one of them, Kay Simpson, a former president, is still an active participant and also became a very dear friend.

I owe a big thank you to my family for their continued support and understanding and for the many cold suppers in those early years.

On behalf of all the volunteers I would like to thank our competent and friendly office staff.

Last but not least, thank you, Ella, for the first 22 years of dedication to bring AMI to where it is today. It has been and always will be a most wonderful experience to work beside you. 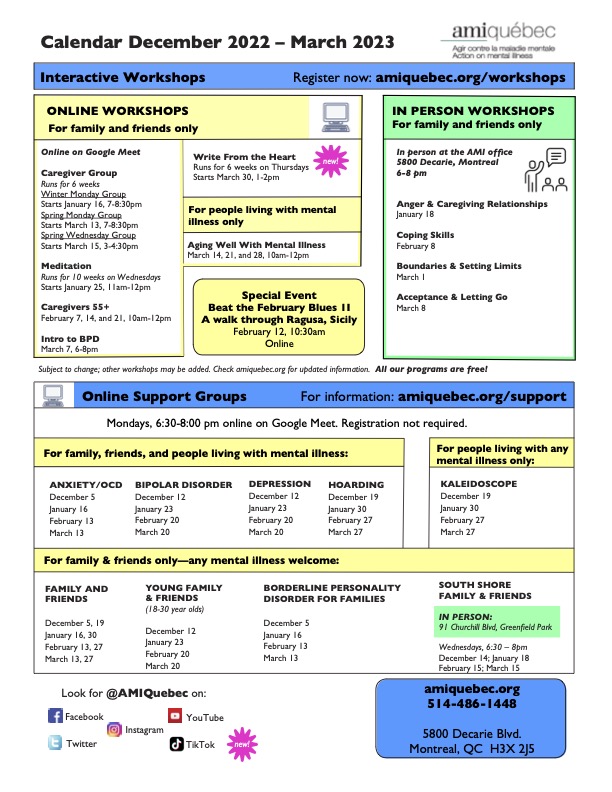 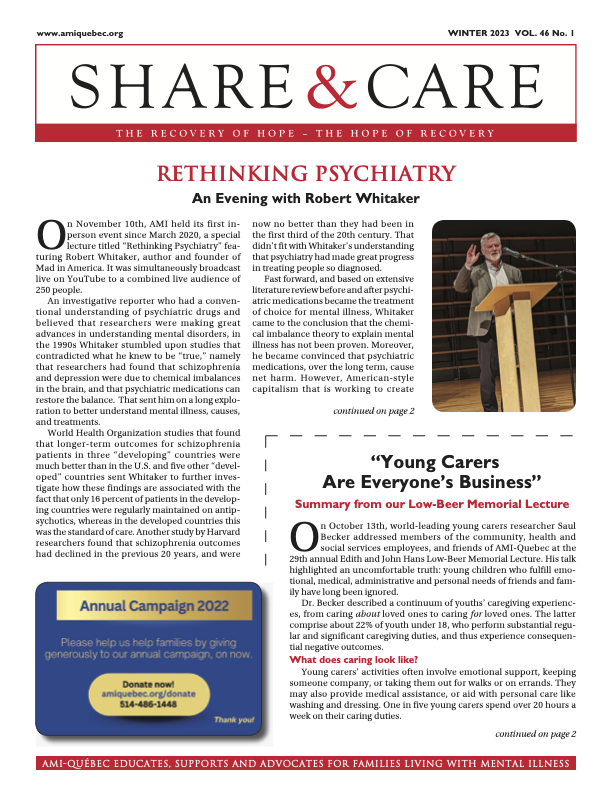